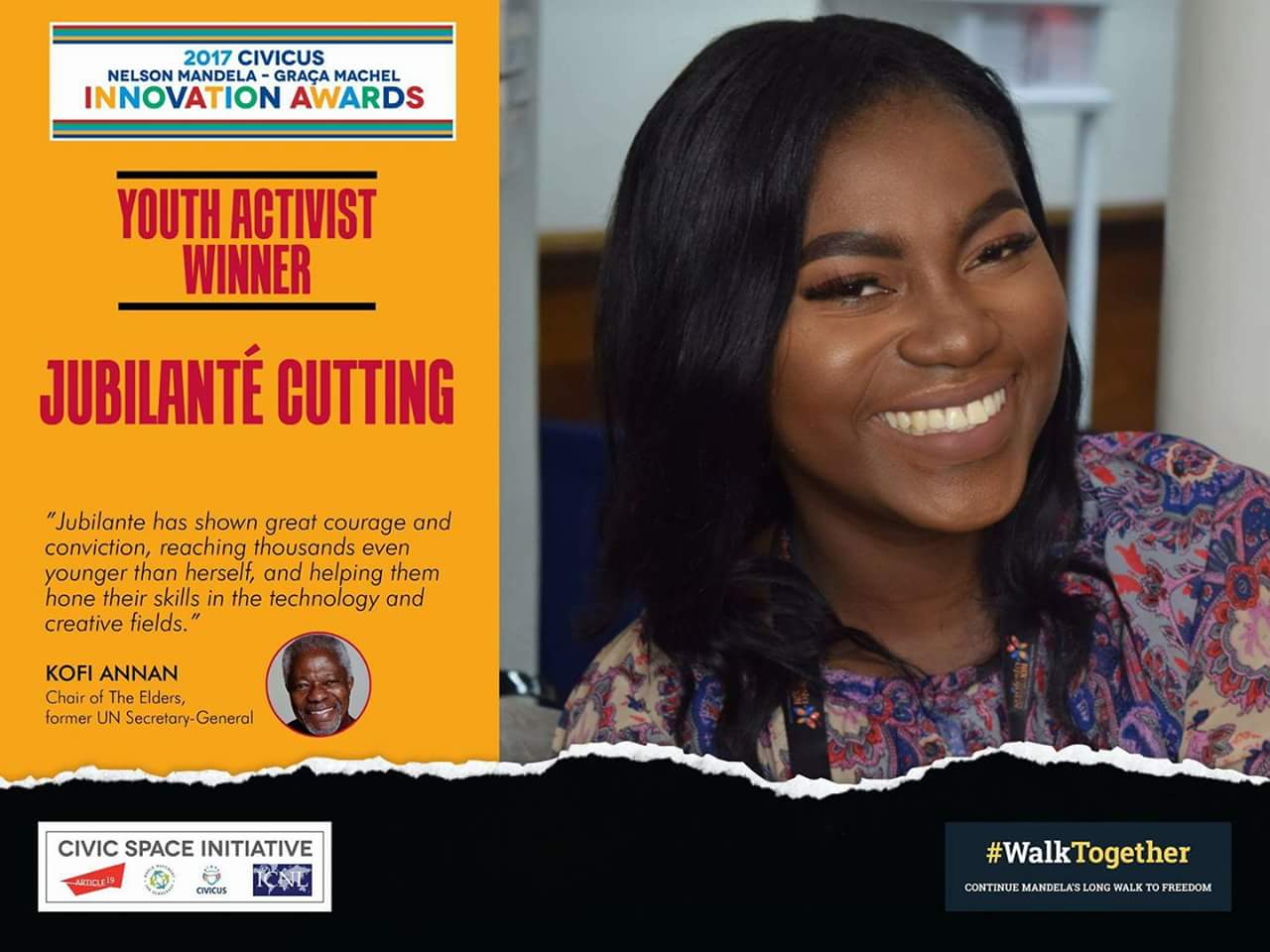 Not many 20-year-olds can claim to have founded an organisation that has reached thousands of young people, while completing a law degree and working part-time at a leading law firm. But Guyana’s Jubilanté Cutting isn’t like most 20-year-olds. Ms. Cutting has been named as a winner of the coveted Nelson Mandela-Graça Machel Innovation Awards for 2017 in the category of Youth Activist for her work with the Guyana Animation Network to pioneer opportunities for Caribbean youth to shape the future of the digital and creative industries.
Cutting was selected from some 300 nominations from across the globe. She will be honored at a ceremony today (7 December) in Suva, Fiji as part of International Civil Society Week.
For the first time this year, the Awards have been run in collaboration with The Elders – a group of independent leaders working together for peace, justice and human rights, founded by Nelson Mandela in 2007. Specifically, the Awards form part of the #WalkTogether campaign, catalysed by The Elders with civil society partner networks. #WalkTogether seeks to celebrate ‘sparks of hope’ like the Award winners, who are inspiring hope, compassion and empathy at a time when the dark forces of fear, xenophobia and hate speech represent a profound threat to global freedoms and unity.
Kofi Annan, Chair of The Elders and former Secretary General of the United Nations, commended Ms. Cutting on her work:

“Jubilante has shown great courage and conviction, reaching thousands who are even younger than herself, and offering them the tools to hone their skills in the technology and creative fields. I hope this will be just the beginning of her work to empower others to participate in a just and sustainable world.”

On hearing the news of her win, Ms. Cutting responded:

“As a young Guyanese woman, the stories of Nelson Mandela and Graça Machel that I read about in my history classes felt so real and yet so far away. I could never have imagined that I would one day receive an award named in honor of these heroes”.

The Awards recognise outstanding efforts in four categories: Youth Activist, Individual Activist, Civil Society Organisation and Brave Philanthropy.
In 2016, Ms. Cutting founded the Guyana Animation Network – an organisation that helps youth to develop skills in digital media and animation. It has since engaged over 3,500 people, including children as young as six years-old, and begun linking artists and animators with some of the world’s leading experts and entrepreneurs. And she’s done it all while completing her legal degree and working as a part-time paralegal at one of the country’s leading law firms.

“The inspiration for the Guyana Animation Network came from my experience at the Animae Caribe Festival in Trinidad and Tobago in 2014. I was amazed that such a festival existed in the region, and I wanted to help young people in my home country of Guyana to capitalise on the global opportunities in tech, animation and art”, Ms. Cutting explained.

Other winners include an Egyptian journalist and activist, a Nigerian NGO promoting mental health awareness, and a German-based philanthropic organisation.
The Nelson Mandela-Graça Machel Innovation Awards are led by global civil society alliance, CIVICUS, through the Civic Space Initiative. Together with CIVICUS’ SPEAK! campaign, the Awards seek to celebrate, promote, and defend the voices of ordinary citizens in ensuring a more just and sustainable future for all.

We use cookies on our website to give you the most relevant experience by remembering your preferences and repeat visits. By clicking “Accept All”, you consent to the use of ALL the cookies. However, you may visit "Cookie Settings" to provide a controlled consent.
Cookie SettingsAccept All
Manage consent

This website uses cookies to improve your experience while you navigate through the website. Out of these, the cookies that are categorized as necessary are stored on your browser as they are essential for the working of basic functionalities of the website. We also use third-party cookies that help us analyze and understand how you use this website. These cookies will be stored in your browser only with your consent. You also have the option to opt-out of these cookies. But opting out of some of these cookies may affect your browsing experience.
Necessary Always Enabled
Necessary cookies are absolutely essential for the website to function properly. These cookies ensure basic functionalities and security features of the website, anonymously.
Functional
Functional cookies help to perform certain functionalities like sharing the content of the website on social media platforms, collect feedbacks, and other third-party features.
Performance
Performance cookies are used to understand and analyze the key performance indexes of the website which helps in delivering a better user experience for the visitors.
Analytics
Analytical cookies are used to understand how visitors interact with the website. These cookies help provide information on metrics the number of visitors, bounce rate, traffic source, etc.
Advertisement
Advertisement cookies are used to provide visitors with relevant ads and marketing campaigns. These cookies track visitors across websites and collect information to provide customized ads.
Others
Other uncategorized cookies are those that are being analyzed and have not been classified into a category as yet.
SAVE & ACCEPT